Close
By clicking “Text Me” you agree to receive a message to the provided phone number. Standard message and data rates apply.
or
text us @ 216-800-9919 Shade Spotlight Join our community - Tag your photos #EverydayZoya for a chance to be featured here! View the Gallery 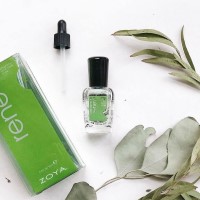 -Works well, even on other brands

I only use nail polish brands that are free of tolulene, formaldehyde, etc. Finding a thinner that works well with them is not all that easy. This stuff works like a charm-- not only with the Zoya nail polishes and Naked Manicure products, but also with Inglot`s "breathable" O2 line of polishes. The only drawback is that it`s rather expensive for how much you need if you polish your nails every week and don`t like to throw out thickened favorite colors.
Ananda
-Pittsburgh, PA
Consumer Review

I was hesitant to buy this but am so glad I did. My nail polish went from being thick and clumpy to good as new without thinning it too much. Great product!
jen10
Consumer Review

It worked pretty well, but it took waaaaaaaay more than one drop to work on my armor top coat which had thickened.
But more importantly, this stuff disappears! I bought a bottle, used two squirts in my armor polish, a few weeks later I looked at the bottle and it was half empty. Used two squirts again, and again a week later the bottle is almost empty, well below the dropper so I can barely get it out.
What do I have to do to keep the elves from stealing this stuff from me? Feels like a waste of money, I only used it twice, so it hasn`t really saved me much of anything

I was skeptical when I bought this product, but it turned my old, thick, nail polishes into the way they were when I first bought them. It is a real money-saver!
Add a Review
Review Guidelines
We want to publish your review.

Please avoid inappropriate language, personal contact information, other brands, and external links.
Back to top Back to top
feedbacktell us what you think!